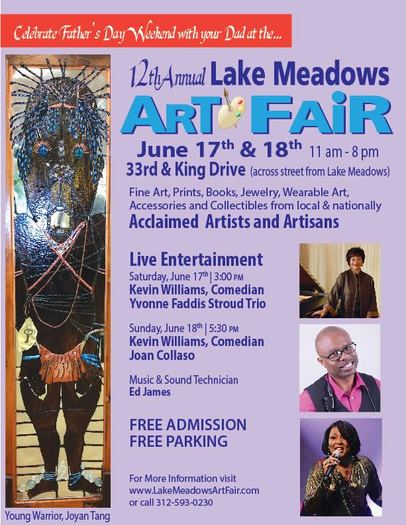 Chicago, IL (June 8, 2017) – One of the most anticipated art fairs of Chicago’s Summer season takes place during Father’s Day weekend. The Lake Meadows Art Fair will be held on Saturday and Sunday, June 17 and 18, 2017 from 11:00 a.m. to 8:00 p.m. in the Bronzeville community at 33rd Street and M.L. King Drive, across from Lake Meadows Shopping Center. Featuring more than 25 local and national fine artists, jewelry makers, clothing designers, hat makers, artisans and vendors of specialty items and collectibles, the Lake Meadows Art Fair provides something for everyone. Food and beverages will also be available for sale.

“The Lake Meadows Art Fair celebrates the richness of the African-American and African heritage and culture. Through the beauty of paintings, sculptures, ceramics, photography, wearable art clothing, and handmade jewelry, the talented artists are given the opportunity to share and sell their work to an appreciative audience,” said Helen Y. West, curator and executive producer of the Lake Meadows Art Fair. “Holding the Lake Meadows Art Fair during the Father’s Day weekend is our way of honoring fatherhood and inviting families to join us for a fun and creative day outdoors,” she added.
An important part of the Lake Meadows Art Fair tradition is the presentation of a featured artist. This year’s artist honoree is Joyan Tang, a former Hyde Park resident whose specialty is stained glass. She also has artistic expertise in ceramics, wood cutting, and painting. Tang has been a working artist for more than two decades. When Tang began working in stained glass in 2002, she says, “I loved the feel of cutting glass to create a picture from it.” She knew she had found her way of expressing herself. Tang has come full circle with Helen West who presented Tang in her first professional gallery showing in 2006.
As in previous years, the Lake Meadows Art Fair uses music as a backdrop for the beautiful artwork. Beginning at 5:00 p.m. on Saturday, the Yvonne Faddis Stroud Trio will take the stage to perform jazz numbers with Stroud at the helm on piano. Stroud has been playing piano since she was three years old and has an incredible ear for music. Her repertoire contains countless compositions. She is currently playing many of Chicago’s popular jazz venues such as Andy’s, the Green Mill, and Winters Jazz Club.
Emmy Award-winner and international vocalist Joan Collaso will light up the Lake Meadows Art Fair stage on Saturday at 8:00 p.m. bringing her sensual melodies, colorful improvisations, and soulful stylings that capture both the ear and the heart. Collaso blends the textures of jazz, R&B, and gospel into her distinctive style. A favorite of jazz festivals, Collaso has performed at the Elkhart Jazz Festival for over a decade, the Chicago Jazz Festival in 2013, and the African Festival for the Arts where she has opened for such iconic performers as India.Irie and Jeffery Osborne. In 2016, she performed her one-woman Show, “A Tribute to Nancy Wilson & Shirley Horn” in Las Vegas. Collaso has performed backing vocals for a host of popular artists, including Stevie Wonder and “Queen of Soul” Aretha Franklin.

To make everyone smile and laugh out loud, comedian and improvisation artist Kevin D. Williams will entertain on both Saturday at 3 pm and Sunday at 5:30 pm.  Williams is a graduate of Columbia College Chicago and studied comedy writing at Second City. He performs both stand-up and improvisation. Williams recently performed on NBC’s “Last Comic Standing” and is a contributing writer for Humor Mill magazine. He will be featured next month at the House of Blues.

Ed James will serve as DJ throughout the art fair spinning his combination of old school, R&B, adult contemporary, and jazz. His music, the performing musicians and all the talented artists and vendors will join the community to celebrate Father’s Day and the 12th anniversary of the Lake Meadows Art Fair.

Attendance and parking at the Lake Meadows Art Fair are free of charge.